The currency wars and the risks for the global economy

The competition has evolved during history. After military and diplomatic conflicts a new type of conflicts has appeared – currency conflict, which is more modern type of conflicts in competing for domination in the world. The currency wars is a way how countries compete for world dominance. The currencies are depreciated in order to support economic growth after financial crisis of 2008-2009.

The history and the essence of currency conflicts

The exchange relationships are starting in history with barter operations, when it was difficult to identify the value of a good during exchange process. In this context, gold and silver coins are introduced as instrument for measuring and keeping values. But it has not solved the problem of equity exchange value because precious metal coins were subject to natural deterioration and criminal counterfeiting. Often degradation of coins was made intentional. Legal content reduce of precious metal in the currency, in our opinion, was the first monetary conflict in history of mankind. In 18th century is introduced bimetallism, but it was difficult to establish the amount of the whole gold and silver in the world. During 19th century, paper money based on gold standard began to be more often used. After World War 1, in 1922 at Genoa conference the gold standard was established – the amount of currency was connected to the amount of gold. Pound and dollar become main foreign currency reserves. Yet monetary confrontation reached a real conflagration during capitalist production relations development, intensifying economic relations between nations and legalization national monetary systems. The amount of gold was limited, and the government could not print more money for necessities. The Great Depression from 1929-1933 has forced UK to left the gold standard in September 1931, and the pound has been depreciated. The US competitiveness also was affected and in 1934 was adopted “Gold Reserve Act” – the amount of gold from banks was nationalized. By 1936, France and Germany also rejected the gold standard. In 1944, at Bretton Woods conference, a new monetary system was established – US dollar become main foreign currency reserve, which had convertibility in gold. All other 43 countries (except USA) that participated at the conference could exchange dollars on gold.

But during years, the amount of dollars has increased more quickly than amount of gold. In 1971 USA has canceled the fixed convertibility to gold (35$ per ounce). At Jamaica conference in 1976, gold was demonetized and gold standard was canceled. Alongside dollar, other foreign currencies as reserves become british pound, swiss franc, japanese yen, French franc and west-german mark. But the problem remains because there are currently different national and regional monetary systems that are in constant competition in the global economy. An important evolution has European monetary systems, established in 1972. In 1979, was established ECU – European currency unit, a currency basket of European currencies, similar to SDR (Special Drawing Rights, the virtual currency of International Monetary Fund). In 2002, euro is adopted, by 12 European countries.

The manifestation of modern currency wars

Expression “currency wars” was used in 2010 for the first time by Guido Mantega[3], the former Brasil’s finance minister between 2006 and 2015.

Currency war in Japan. In Japan, the central bank is maintaining the overnight rate between 0 and 0.1%[4]. Also the bank is planning to increase the monetary base with 80 trillion yens per year. Through such methods, Bank of Japan is trying to stimulate economic growth and to stop the deflation.  But the problems of Japan are more serious, because of aging of population. Government is very indebted – the public debt has an amount of 230 % of GDP in 2014 , a huge amount in developed countries. For comparison, for Greece this indicator is 177 % and in the euro area - 92 %. In order to increase the labor force, the Japanese government took measures to support foreign migrants. Such policies are already applied in the US and Western Europe. Another instrument to support the economy is the exchange rate. From the graph we can see that in past 4 years Japanese Yen (JPY) has depreciated by over 50% to dollar (USD) from 80 yens per dollar in 2011 to over 120 yens per dollar in 2015. 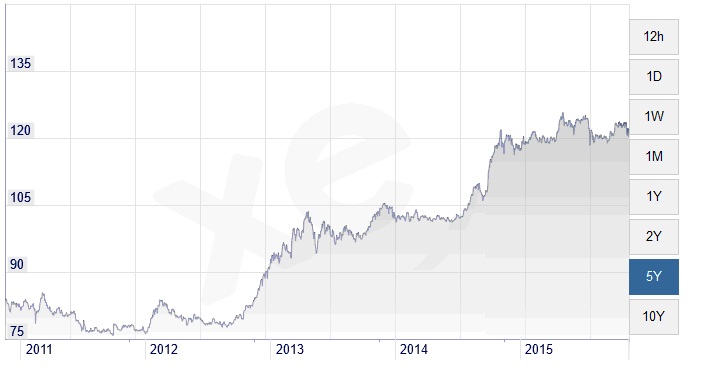 Currency war in Switzerland. In January 2015 Swiss franc appreciated significantly, because the central bank of Switzerland refused to maintain fixed the exchange rate at 0.83 euros per franc, and during 15 January, the franc has appreciated with 18% up to 0.98 euros per franc. Swiss National Bank promised to sell Francs “as more as possible” in order to stop the appreciation. The investors see Swiss franc as a very good asset to invest - many Russian billionaires chose Swiss franc as an important asset after rouble depreciation in December 2014, so the demand for Swiss franc was very high. After franc appreciation Swiss stocks lost 105 billion Swiss francs of their combined market value or 8.67 percent on January 15, 2015. The stock prices of companies like Swatch, UBS, Richemont and Holcim have fallen between 11 and 16%. Another “victims” of franc appreciation were Poland, Hungary and Romania. Until 2008, the credits in Swiss franc were very popular in East Europe (in 2007 credits in francs were cheaper than in east European currencies) and the appreciation of this currency was a shock not only for banking system but also for whole economy of these 3 countries. The Polish zloty reacted immediately, falling from an opening rate from 3.55 to the franc to 5.19 per franc. Swiss franc loans represent 14.6% of outstanding loans, and account for 37% of all housing loans by value in Poland at the beginning of 2015.

In Hungary, the forint reached a record low against the Swiss franc by mid morning, falling to 315 forints per swiss franc after opening at 266 forints per franc. The Swiss franc developments have major implications because up to 1.3 million Hungarian households are set to convert foreign currency mortgages back to forints. The same issues have also the Romanian debtors, which have to pay for their credits in francs. The appreciation of franc is also a problem for Austria, Raiffeisen and Erste, both Austrian banks are exposed on banking markets of Poland, Hungary and Romania. The Swiss franc case is specifically interesting, because the strong appreciation had a negative impact on other countries. 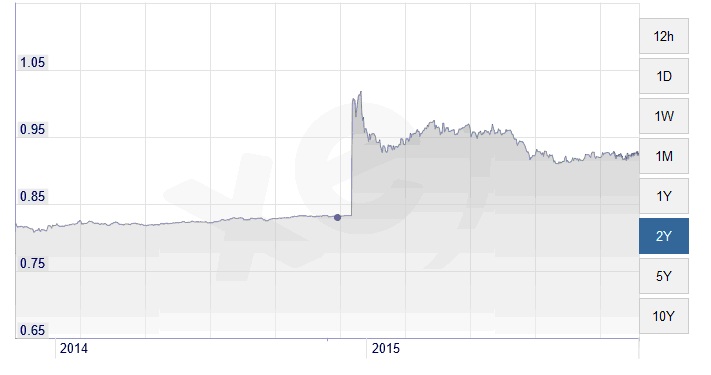 Currency war in China. In August 2015, Chinese yuan has depreciated to dollar – from 6.20 yuans per dollar the rate has increased up to 6.39 yuans per dollar. Experts argue that China is trying to support the economy, after crash on stock exchange by 40% in August 2015. The economic growth is lower than expectations and government is trying to stimulate consumer spending. The People’s Bank of China (the central bank) has reduced the interest rates in order to support economy on August 25 from 4.85% to 4.6%. This tendency is declining from June 2012, when the rate was reduced from 6.56% to 6.31%. These operations may have a negative impact between on political relationships between US and China. From geopolitical point of view, China is trying to become the biggest economy in the world, competing with US for this status. China is implied in new projects like BRICS (a group of emerging economies – Brazil, Russia, India, China and South Africa) and is a co-founder of  New Development Bank. This new bank is seen as an alternative for World Bank and International Monetary Fund (IMF). As a mediator of global economy and in order to reduce the tensions between countries, IMF has recognised the increasing influence of Asian countries on global economy. In November 2015, the IMF decided to include the Chinese yuan in the currency basket of SDR (Special Drawing Rights – the virtual currency of IMF) from October 2016. It’s an important victory for China from geopolitical and geoeconomical points of view. 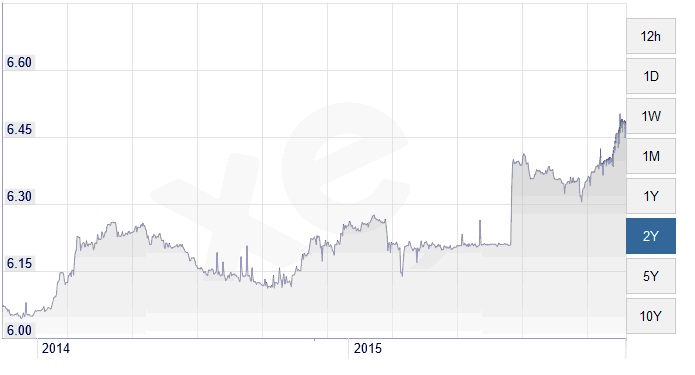 The risks of currency conflicts for national and global economic evolutions

Currency depreciation will have negative consequences – it will reduce the purchasing power of citizens, because the imports will be more expensive, exports cheaper abroad and the trade balance will have a positive tendency, while trade balance of other countries will be affected negative. This may lead to political or diplomatic conflicts between countries (like China and USA case).

Another risk is the inflation that will affect the standards of the life. Also the debt denominated in foreign currency becomes more expensive. The debt and debt service will increase, pressing the budget of a country. The public spendings may be reduced for education and health, and that could lead to political changes in a country.

As a solution for currency wars may be the introduction of a currency for all countries. A potential world currency was proposed by British economist John Maynard Keynes, called “bancor” in 1944 at Bretton-Woods conference, but it was rejected. But this idea become practical for European countries – euro was introduced in 2002. Today, euro is used by 19 countries of European Union, Kosovo and Montenegro. Until 2002, some European countries also depreciated their currencies in order to solve their economic issues, especially Portugal (escudo), Spain (peseta), Italy (lira) and Greece (drachma). After 2002, all these countries have adopted euro. Low interest rates, stability were very promising for Eurozone countries. It seemed that currency wars have ended in Europe. But after financial crisis, these 4 countries were very indebted and were forced to reduce public spendings, and the gross domestic product has dropped very much. High unemployment, high public debt have created new political and diplomatic conflicts between these 4 countries and Germany, the main economy of Eurozone. Many European politicians argue that their country should exit from Eurozone. The risks are very high, because it may lead to Eurozone breakup, and that could lead to a disaster in the European economy. Another solution might be the SDR – IMF is trying to stop such conflicts, including Chinese yuan in SDR currency basket. From October 2016, SDR will include (dollar- 42%, euro- 31%, yuan -11%, by 8% both yen and pound).

We can conclude that the currency wars, occur due to some factors. First, often central banks have no instruments to stimulate economic growth (central banks can not reduce the key rate because it is close to 0% in the US, Eurozone, UK and Japan).

Second, export is supported in order to make exported goods cheaper abroad, and imported goods more expensive on local market. This phenomenon is quite common in Japan. If in 2011 the dollar was worth 81-83 yens, the dollar costs over 120 yens at the moment. For the major Japanese companies, such as Samsung is very important depreciation of the yen.

So currency wars occur because is a weak economic growth in main economies. If this instrument will be used in all countries, the global economy will face high inflation risks, and no one will benefit from these “wars”. A solution for such “wars” might be a global currency, like SDR or bancor, but at the moment countries are using depreciation instrument to compete better on the global market.